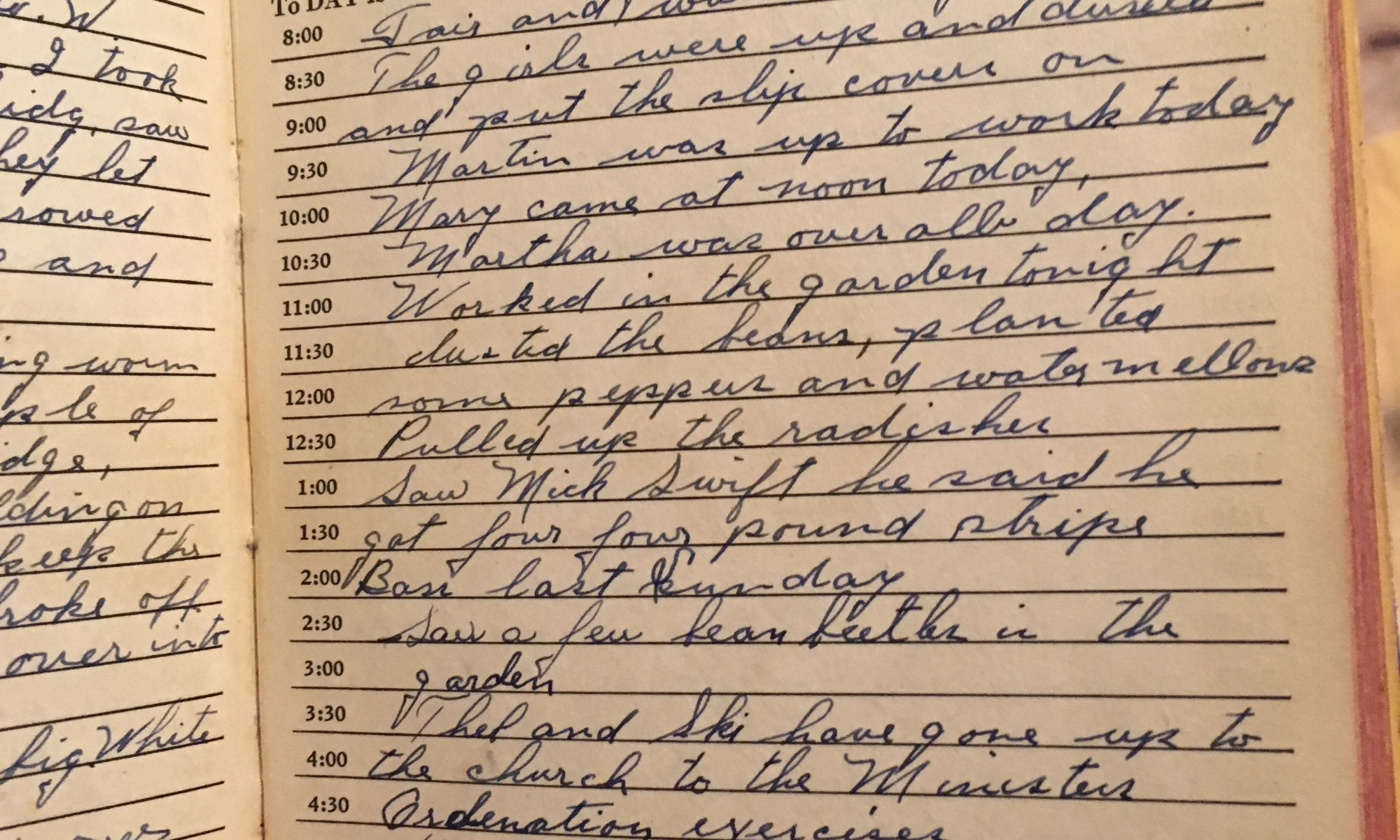 ToDay is the Birthday of 1 year in State Guard

The girls were up and dusted and put the slip covers on.

Martin was up to work today. Mary came at noon today. Martha was over all day.

Worked in the garden tonight, dusted the beans, planted some peppers and watermellons.

Pulled up the radishes.

Saw a few bean beetles in the garden.

Thel and Ski have gone up to the church to the Minister’s Ordination exercises. He is leaving here for the west this summer.

“We are shaped and fashioned by what we love.” Goethe

Made the first picking of the second crop of beans on the hill.

Eleanor got a letter from Bobbie.

Stopped in to see Eric, he walked by himself today.

Ski stopped over at Pick’s tonight. Walder’s brother and his family started back to Washington tonight.

“It is the will, and not the gift, that makes the giver.” Lessing

Two entries for today – in the first one, the month is crossed out and replaced with March, which seems to make sense as he’s talking about planting peppers (though I’m not really a gardener, so I could be wrong). Jesse uses the next spread of dates to record four days in September, the 10th through the 12th. We’ll just play along.

Yesterday I had the privilege of walking the same garden my great-grandfather describes in his journal, up the hill. My parents and I visited Fred Dunford, archaeologist and gardener at Plimouth Plantation, and he spent a very generous couple of hours showing us the bowling green, the pool, the cutting garden, and even the barn (now offices) where it’s likely Jesse stored his tools and supplies and spent time fixing, painting, organizing, and, perhaps, contemplating the meaning of life.

The land is different—just as humans evolve, so do the trees and fields around us. The woods have grown up and claimed views that were open and even sweeping back when Jesse was going up the hill, but you can still get a sense of what it must have looked like. If you look closely, you can see the past overlaid on the present—the Hornblower family coming and going, local workers doing their jobs, and Jesse in the center of it, marking the days in his journal and watching the horizon for the changes he might have known were on their way.